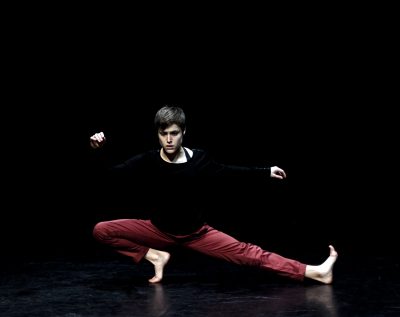 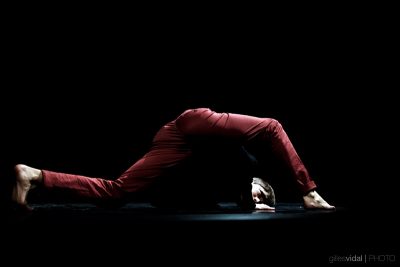 
P=mg is the physical formula for weight, the force of gravity exerted by the Earth on a massive body due solely to the proximity of the Earth. This force is omnipresent, it applies to each particle of the body and constantly pulls us down, while by habituation this consciousness escapes us.

Alongside this inevitable physical dimension, I wanted to highlight a psychological dimension that is just as universal, this often unconscious weight that diverts us from our objectives or hinders our progress. This can come from others as well as from oneself, through fear, belief or preconceived ideas… I think that if the family environment in which I grew up had not been so opposed to my desire to dance, I might never have made it my profession.

On a stage with no set elements, P=mg is an experiment, a situation in which gravity is increased tenfold in order to imagine the different stages that a body would go through to adapt and overcome such a situation. How this constraint can, on the contrary, become a force and be used as a stepping stone to aim even further, higher, and finally allow the body to reach the state where, without this difficulty to overcome, it might never have reached.

Some upcoming dates : We were there...
This piece is no longer touring… sorry !