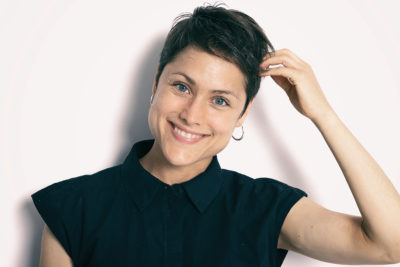 What dimensions must the body engage in to relate or evoke something? This is the first question that I wrestle with when the need to create comes to me, because what is essential to my research is to give an embodied translation to what could, at first glance, seem abstract.

I need, first of all, to talk about us: the men and women that we are, which I observe with as much fascination as aversion. I see souls stuck in boxes, boxes that gesticulate, interact, and deceive as they can in order to give meaning to their small bit of life here on Earth. Souls full of the divine force from which their very essence is made, but unfortunately often blinded by ignorance.

The crisis that we live in is not only economical and financial, but also philosophical and spiritual. It leads us to universal questions: what makes human beings happy ? What can be considered real progress ? What are the conditions for harmonious social interactions ? These are all questions that stay with me and feed my desire to express and share through bodies in movement, because the body never lies. There is something sacred in every human, but it is not his person himself, it is just this human empty from any ego.

Dance is to me the pure expression of the soul. When we dance with an open heart, the soul that vibrates from the inside can sometimes reach the heart of another, if the other accepts to open his heart as well. Dance is the universal language that unites all people, all ages, despite where we come from or who we are. I perceive a body in movement the same as I listen to music; the art of choreography is for me the song of a visual and graphic body. Like music, dancing exists to liberate an internal truth purified of all codifications and limitations of language. Dancing reveals the ineffable in each of us. Working with the palpable material of the body, I always look to transpose the physical effects of that which acts on us.  How, for example, a body can be traversed by an augmented gravitational force ( P=mg ), by psychological turmoil ( Diagnostic F20.9 ), by the presence of another or others ( Compact and Quintette ), or by the arbitrary decisions of an external group to which one has given all power ( Carte Blanche ). I like to create by giving myself constraints and forcing myself to remain within them, because I see in these boundaries a motor for creativity.

I like to finish with a quote from the yoga master B.K.S Iyengar whose remarkable work and comprehension of the body is a profound source of inspiration to me : “The challenge is to learn that the body is not an obstacle but the instrument of its own realization.”

In 2012 after a strong professional experience as a performer, Jann decided to found her own company, Cie BurnOut, and to write her first own solo piece, P=mg for which she was 9 times awarded by national and international prizes, such as Paris Young Talent Prize and Beaumarchais-SACD Prize in Paris, Solo-Tanz Theater Prize in Stuttgart, Masdanza Prize in Canary Islands, Machol Shalem Prize in Jerusalem, and Gdansk solo dance contest Prize in Poland.

In 2015, Jann Gallois confirmed her artistic signature, combining hip hop and contemporary dance, by creating once again a solo-piece called Diagnostic F20.9, for wich she was nammed “Dance Bearer of Hope” of the year by the german newspaper Tanz.


Based in Paris, she was first supported by the Louis Aragon Theatre in Tremblay-en-France (2016-2017) before being one of the official supported artists of Chaillot – National Theater of Dance (2017-2021) and the Maison de la Danse in Lyon (2018-2019). Since 2020, Jann Gallois has been associated artist at the Paul Eluard Theater in Bezons and at the National Theater of Beauvais. On 2022, April the 15th, she is officially recognized as “Officier de l’ordre des Arts et des Lettres” by the French Ministry of Culture.

Since her very beginning, Jann Gallois has created 10 pieces :

In addition to her personal projects, she regularly receives commissions all over the world. In May 2014, she responded to a commission from the MPAA in Paris and created Humanoïde, a piece for 7 amateur dancers, in February 2017 Jann created One Step One Dream in Burkina Faso, a piece for 5 Burkinabe dancers following a commission from the French Institute of Ouagadougou and in July 2017 she co-created with the director Lazare the duet L’éclosion des gorilles au coeur d’artichaut at the Avignon Festival as part of the Sujets à Vif program.

Each of these creations are unique universes and aesthetics, going from a demanding and precise dance to an asserted theatricality. Since the creation of her company in 2012, Jann Gallois has performed her entire repertory with more than 350 performances in France and abroad (Switzerland, Spain, Italy, England, Germany, Denmark, Israel, Brazil, Japan, Norway, Laos, Russia, Panama, Burkina Faso…)